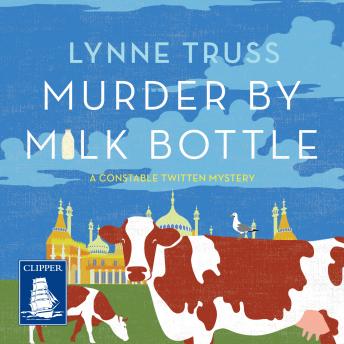 The latest installment in Lynne Truss's quirky and charming prize-winning series set in 1950s Brighton sees her trio of police detectives investigating a case with a most curious murder weapon.

The August bank holiday is approaching and after two extremely high-profile murder cases, Constable Twitten is eagerly anticipating a quiet spell at work. But then they find the bodies - and the milk bottles. Three seemingly unconnected victims - a hard-working AA patrolman, a would-be Beauty Queen, a catty BBC radio personality - have all been killed with the same, highly unusual murder weapon. Constable Twitten, Sergeant Brunswick and Inspector Steine are initially baffled, the town is alarmed, and the local newspaper is delighted: after all, what sells papers better than a killer on the loose? Can our redoubtable trio solve the case and catch this most curious of killers before they strike again?


"[A] pitch-perfect send-up of 1950s Brighton with nods to Graham Greene ... Hilarious." SUNDAY TIMES on the Constable Twitten series.

This title is due for release on July 9, 2020
We'll send you an email as soon as it is available!