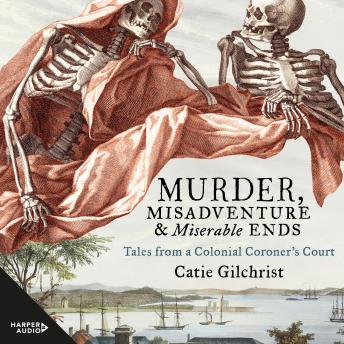 Murder, manslaughter, suicide, mishap - the very public business of determining death in colonial Sydney. Murder in colonial Sydney was a surprisingly rare occurrence, so when it did happen it caused a great sensation. People flocked to the scene of the crime, to the coroner's court and to the criminal courts to catch a glimpse of the accused.

Most of us today rarely see a dead body. In nineteenth century Sydney, when health was precarious and workplaces and the busy city streets were often dangerous, witnessing a death was rather common. And any death that was sudden or suspicious would be investigated by the coroner.

Henry Shiell was the Sydney City Coroner from 1866 to 1889. In the course of his unusually long career he delved into the lives, loves, crimes, homes and workplaces of colonial Sydneysiders. He learnt of envies, infidelities, passions, and loyalties, and just how short, sad and violent some lives were. But his court was also, at times, instrumental in calling for new laws and regulations to make life safer.

Catie Gilchrist explores the nineteenth century city as a precarious place of bustling streets and rowdy hotels, harbourside wharves and dangerous industries. With few safety regulations, the colourful city was also a place of frequent inquests, silent morgues and solemn graveyards. This is the story of life and death in colonial Sydney.

'Catie Gilchrist draws back the veil on death in nineteenth-century Sydney to reveal life - ordinary, tragic and hopeful' David Hunt, author of Girt and True Girt

This title is due for release on February 18, 2019
We'll send you an email as soon as it is available!