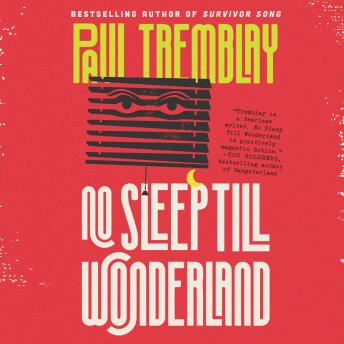 No Sleep Till Wonderland: A Novel

Narcoleptic Southie PI Mark Genevich returns in this sequel to The Little Sleep from the Bram Stoker Award–winning author of Survivor Song and The Cabin at the End of the World.

Like most private eyes, Mark Genevich is something of a lone wolf. So group therapy isn’t a great fit. But his landlord/mother is convinced it will help his narcolepsy—ignoring the fact that his disorder is a physical condition. Truth is, he has the time. It’s been a year and a half since his last big case, or any case.

It’s never a wise choice to go on a two-day bender with someone you meet in group therapy, but there’s something about Gus that intrigues Genevich. And when his new drinking buddy asks him to protect a female friend who’s being stalked, the PI finally has a case.

Unfortunately, he’s about to sleepwalk right into a very real nightmare. Before long he’s a suspect in an arson investigation and running afoul of everyone from the cops to a litigious lawyer and a bouncer with anger management issues. Genevich must keep his wits about him—always a challenge for a detective prone to unexpected blackouts and hallucinations—to solve the crime and live to show up at his next therapy session.

In Paul Tremblay’s follow-up to The Little Sleep, unreliable narrator Mark Genevich once again leads readers on a surreal and suspenseful wild ride through the mean streets of South Boston and his own dreamlike reality.

No Sleep Till Wonderland: A Novel