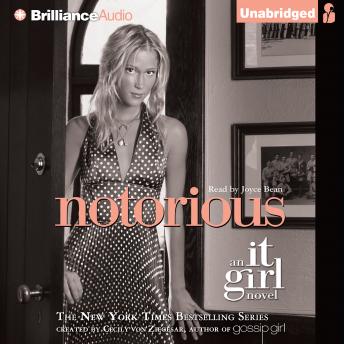 Notorious: An It Girl Novel

#2 of The It Girl Series

Jenny Humphrey arrived at elite Waverly Academy with dreams of turning herself into the sophisticated, awe-inspiring Jenny she’s always wanted to be. And it’s finally, finally happening! She’s even rooming with the two most popular girls in school, Callie Vernon and Brett Messerschmidt, and bunking in the notorious Tinsley Carmichael’s old bed. Coolness is rubbing off on her, even while she sleeps!Okay, so Callie almost got Jenny kicked out of Waverly on her first night there, but there’s a bright side. Like Callie’s shaggy-haired boyfriend, Easy Walsh, who just can’t seem to focus on his girlfriend anymore. Now everyone is gossiping about boyfriend-stealing Jenny. They can’t help but whisper: Jenny’s it.But who’s that flying in on her seaplane? After getting expelled last year, Tinsley’s back and she’s not about to let some big-chested, rosy-cheeked city-girl get all the attention. And she’s certainly not going to let Callie and Brett forget that she took the fall for them. Now it’s their turn.Is Waverly big enough for Jenny, Callie, Brett, and Tinsley? They’re all beautiful, captivating, and a little bit crazy...but there can be only one It Girl.

This title is due for release on June 6, 2006
We'll send you an email as soon as it is available!