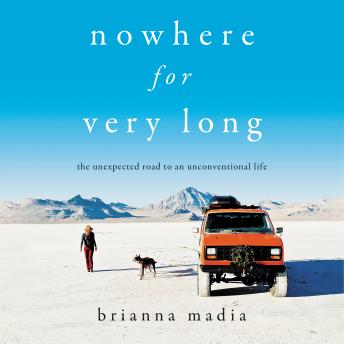 Nowhere for Very Long: The Unexpected Road to an Unconventional Life

In this beautifully written, vividly detailed memoir, a young woman chronicles her adventures traveling across the deserts of the American West in an orange van named Bertha and reflects on an unconventional approach to life

A woman defined by motion, Brianna Madia bought a beat-up bright orange van, filled it with her two dogs Bucket and Dagwood, and headed into the canyons of Utah with her husband. Nowhere for Very Long is her deeply felt, immaculately told story of exploration—of the world outside and the spirit within.

However, pursuing a life of intention isn’t always what it seems. In fact, at times it was downright boring, exhausting, and even desperate—when Bertha overheated and she was forced to pull over on a lonely stretch of South Dakota highway; when the weather was bitterly cold and her water jugs froze beneath her as she slept in the parking lot of her office; when she worried about money, her marriage, and the looming question mark of her future. But Brianna was committed to living a life true to herself, come what may, and that made all the difference.

Nowhere for Very Long is the true story of a woman learning and unlearning, from backroads to breakdowns, from married to solo, and finally, from lost to found to lost again . . . this time, on purpose.

I'd heard a lot about this book, even though I don't follow the author online, and had high expectations. In the end it wasn't really for me. The story spends most of the time in the authors childhood and dealing with living in a divorced household. Which wasn't what I wanted or expected from a "desert, van dwelling memoir." As someone who lives a nomadic life, I was just bored. The writing was a little clunky and the story jumped around in a way that didn't really connect when it seemed like it should. It's a short read so give it a go but I didn't walk away inspired or awed.

Brianna is a natural storyteller. This memoir has me *nearly* convinced to flee my life as a high school teacher to live in a van in the desert. Absolutely worth the read, even if, and maybe especially because, you’ve followed her on instagram for years. Absolutely breath-taking imagery, hilarious encounters, and the best “faith in humanity” restorer I’ve read in years. Love love love her and “nowhere for very long”.

Amazing! I loved this book so much!

Your narration brought me to tears in multiple occasions after years of following your life on IG. Thank you.

i loved this book. the story telling is beautiful & the author’s love for the simple things in life shows in every page. definitely will listen again & hug my dog tight.