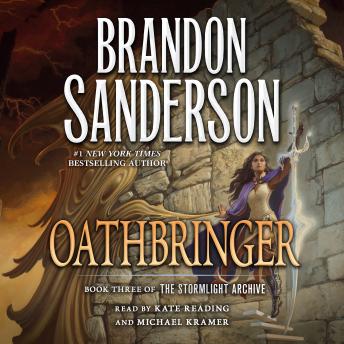 #3 of The Stormlight Archive

'Character development is at the heart of the book, and it is here that Kramer and Reading shine, with remarkably consistent and multifaceted characters that fuel the action of the story...Adept pacing highlights both the intensity of hand-to-hand combat and quieter moments of sorrow and grief, fully realizing the intricate world that Sanderson has created.' — AudioFile Magazine

The eagerly awaited sequel to the #1 New York Times bestselling Words of Radiance, from epic fantasy author Brandon Sanderson at the top of his game.

In Oathbringer, the third audiobook in the New York Times bestselling Stormlight Archive, humanity faces a new Desolation with the return of the Voidbringers, a foe with numbers as great as their thirst for vengeance.

Dalinar Kholin’s Alethi armies won a fleeting victory at a terrible cost: The enemy Parshendi summoned the violent Everstorm, which now sweeps the world with destruction, and in its passing awakens the once peaceful and subservient parshmen to the horror of their millennia-long enslavement by humans. While on a desperate flight to warn his family of the threat, Kaladin Stormblessed must come to grips with the fact that the newly kindled anger of the parshmen may be wholly justified.

Nestled in the mountains high above the storms, in the tower city of Urithiru, Shallan Davar investigates the wonders of the ancient stronghold of the Knights Radiant and unearths dark secrets lurking in its depths. And Dalinar realizes that his holy mission to unite his homeland of Alethkar was too narrow in scope. Unless all the nations of Roshar can put aside Dalinar’s blood-soaked past and stand together—and unless Dalinar himself can confront that past—even the restoration of the Knights Radiant will not prevent the end of civilization.


Other Tor books by Brandon Sanderson

The Mistborn trilogy
Mistborn: The Final Empire
The Well of Ascension
The Hero of Ages

Mistborn: The Wax and Wayne series
Alloy of Law
Shadows of Self
Bands of Mourning

Other books by Brandon Sanderson

Story is great, as are all Brandon Sanderson’s books. Captivating, thought provoking, and unpredictable. However, this book and includes more profanity, sexual innuendo, and crassness. One of the things I loved about Sanderson was that I could recommend him with out a disclaimer, and I can no longer do that.

Awesome book as aways by Mr. Sanderson. Very gripping and well paced story, with elements of human redemption and an interesting view on morality. Who are the void bringers? The only problem is having to wait till 2020 to find out what happens.

Story is awesome, no complaints. Narrators are good, just wish the volume threshold between the two were more balanced. The female narrator at max volume is notably higher than the males. For those who listen in noisy environments it can be hard to hear the chapters with the male narrator. All in all a small price to pay for a great story.

A truly captivating listen and read. So much happens in this story alone that it is hard to believe, by the end, that it has only been one book! Each line of dialogue seems well placed, hinting at secrets that might be just around the corner.

Shallans decent into mental illness is low-key my favorite bit from this book.

an amazing experience with this book so far....

I am continually impressed at how well Sanderson keeps me engaged throughout each of the books in this series. I’m excited to continue onto the next book.

it was really good

Brandon Sanderson is one of my top favorite writers! His work is simply amazing!

Favorite series of all time

amazing book in the stormlight series

one of the most amazing books I've ever read!!!

Sorry it had to end. I want more! Great book, interesting twist.

Love the series so far. Waiting for next one due out in November 2020 Narrators are really good. Think I will try the wheel of time series. Same narrators. This author finished up the time series.

Great!! Can’t wait for the next book

Wow. Long book. But worth the journey. Narration was excellent.

Cant wait for the next book. Let's get on it! lol!

I love the depth and complexity of this series! The characters and moral dilemmas are real and fascinating! Sanderson has done a great job of building unique characters and an engaging world! I love the narrators as well! They add another layer of originally to the work!

The book itself i dont really need to expound on much, It says Brandon Sanderson on the Cover so nuff said. However id really like to give praise to the Narrators Michael Kramer and Kate Reading. They were simply amazing. I half read and half Listened to this book and i cant tell you how many times I would read a chapter and immediately find myself wondering how the Narrators did this part and would then go back to the audio and listen to the parts i just read........ Of course finding that they indeed make that part better. I cant recommend All three, Brandon Sanderson, Michael Kramer and Kate Reading highly enough. This is epic fantasy at its best, with Top notch World building and multi faceted characters who could never be classified in something as limiting as Protagonist/Antagonist, Good or bad. A MUST READ FOR AVID FANTASY FANS, AND MUST TRY FOR READERS LOOKING TO DELVE INTO THE FANTASY GENRE. STORMS THIS WAS GOOD!!!!!!

Among the best of the best.

This series was recommended to me a few months ago and I am so glad I finally gave it a go. Michael Kramer and Kate Reading are both phenomenal narrators and the story is gripping. There were moments when I was jumping up and down in my seat with anticipation. There were moments when I laughed out loud with joy. And there were actually moments when I cried, and that rarely happens to me! I highly recommend reading/listening to the series in chronological order, and don't forget book #2.5 Edgedancer (a favorite!).

Now I'll just be depressed until the next book. Favourite epic fanatasy series highly recommend if you have lots of time.

Absolutely top notch work. Started at book one and listened all the way through.