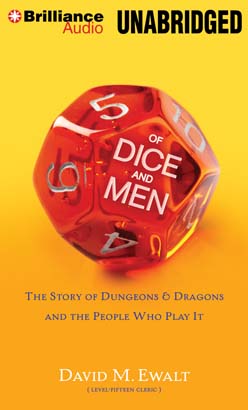 Of Dice and Men: The Story of Dungeons & Dragons and the People Who Play It

The Hobbit meets Moneyball in this definitive book on Dungeons & Dragons—from its origins and rise to cultural prominence to the continued effects on popular culture today.

HERE, THERE BE DRAGONS.

Ancient red dragons with 527 hit points, +44 to attack, and a 20d10 breath weapon, to be specific. In the world of fantasy role-playing, those numbers describe a winged serpent with immense strength and the ability to spit fire. There are few beasts more powerful—just like there are few games more important than Dungeons & Dragons.

Even if you’ve never played Dungeons & Dragons, you probably know someone who has: the game has had a profound influence on our culture. Released in 1974—decades before the Internet and social media—Dungeons & Dragons inspired one of the original nerd subcultures, and is still revered by millions of fans around the world. Now the authoritative history and magic of the game are revealed by an award-winning journalist and lifelong D&D player.

In Of Dice and Men, David Ewalt recounts the development of Dungeons & Dragons from the game’s roots on the battlefields of ancient Europe, through the hysteria that linked it to satanic rituals and teen suicides, to its apotheosis as father of the modern video-game industry. As he chronicles the surprising history of the game’s origins (a history largely unknown even to hardcore players) and examines D&D’s profound impact, Ewalt weaves laser-sharp subculture analysis with his own present-day gaming experiences. An enticing blend of history, journalism, narrative, and memoir, Of Dice and Men sheds light on America’s most popular (and widely misunderstood) form of collaborative entertainment.

Mildly entertaining, however the "Admitting to playing DnD is only slightly more acceptable than admitting to animal cruelty" line is... a lot, and then when the author talks about his 34 year old friend marrying a 22 year old girl, his other friend wearing a fedora with a leather trench coat, you began to get the picture of one of "those" geeks, the ones who are bitter and mean spirited and pretty much kinda sucky.

Great insight into the history of D&D. I really enjoyed learning about the office politics (that sounds sarcastic, but it's sincere!) There's not much information about the game itself; it's mostly focused on the men behind the project. Makes me wish I had been able to be a part of such an incredible project back when the gears first started turning.

This title is due for release on August 20, 2013
We'll send you an email as soon as it is available!