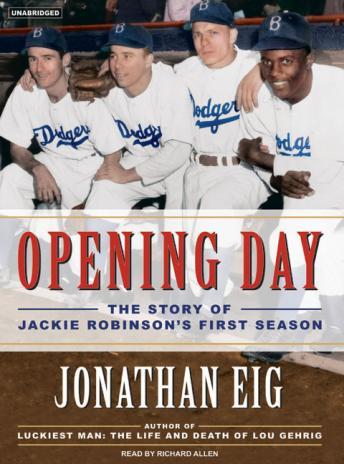 April 15, 1947, marked the most important opening day in baseball history. When Jackie Robinson stepped onto the diamond that afternoon at Ebbets Field, he became the first black man to break into major-league baseball in the twentieth century. World War II had just ended. Democracy had triumphed. Now Americans were beginning to press for justice on the home front-and Robinson had a chance to lead the way.

He was an unlikely hero. He had little experience in organized baseball. His swing was far from graceful. And he was assigned to play first base, a position he had never tried before that season. But the biggest concern was his temper. Robinson was an angry man who played an aggressive style of ball. In order to succeed he would have to control himself in the face of what promised to be a brutal assault by opponents of integration.

In Opening Day, Jonathan Eig tells the true story behind the national pastime's most sacred myth. Along the way he offers new insights into events of sixty years ago and punctures some familiar legends. Was it true that the St. Louis Cardinals plotted to boycott their first home game against the Brooklyn Dodgers? Was Pee Wee Reese really Robinson's closest ally on the team? Was Dixie Walker his greatest foe? How did Robinson handle the extraordinary stress of being the only black man in baseball and still manage to perform so well on the field? Opening Day is also the story of a team of underdogs that came together against tremendous odds to capture the pennant. Facing the powerful New York Yankees, Robinson and the Dodgers battled to the seventh game in one of the most thrilling World Series competitions of all time.

Good historical book on a legend. If you want a book that only pays homage to Robinson, this is not the book for you. This book shows the person that I can only believe is the real one... with both greatness and flaws exposed. I thought the narrator was average, but I would recommend this audiobook.

This title is due for release on April 17, 2007
We'll send you an email as soon as it is available!