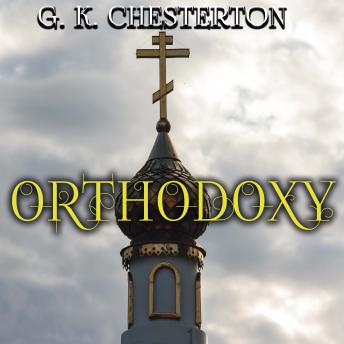 Orthodoxy (1908) is a book by G. K. Chesterton that has become a classic of Christian apologetic. Chesterton considered this book a companion to his other work, Heretics, writing it expressly in response to G.S. Street's criticism of the earlier work, 'that he was not going to bother about his theology until I had really stated mine'. In the book's preface Chesterton states the purpose is to 'attempt an explanation, not of whether the Christian faith can be believed, but of how he personally has come to believe it.' In it, Chesterton presents an original view of Christian religion. He sees it as the answer to natural human needs, the 'answer to a riddle' in his own words, and not simply as an arbitrary truth received from somewhere outside the boundaries of human experience.
The book was written when Chesterton was an Anglican. He converted to Catholicism 14 years later. Chesterton chose the title, Orthodoxy, to focus instead on the plainness of the Apostles' Creed, though he admitted the general sound of the title was 'a thinnish sort of thing'.
Famous works of the author G. K. Chesterton: The Ballad of the White Horse, Lepanto, The Rolling English Road, A Ballade of Suicide, The Napoleon of Notting Hill, The Man Who Was Thursday, The Ball and the Cross, Manalive, The Flying Inn, The Club of Queer Trades, The Blue Cross, The Hammer of God, The Man Who Knew Too Much, The Paradoxes of Mr. Pond.

This title is due for release on May 28, 2021
We'll send you an email as soon as it is available!