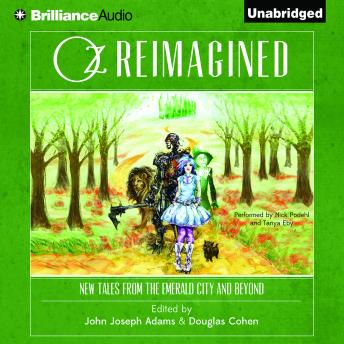 Oz Reimagined: New Tales from the Emerald City and Beyond

When L. Frank Baum introduced Dorothy and friends to the American public in 1900, The Wonderful Wizard of Oz became an instant, bestselling hit. Today the whimsical tale remains a cultural phenomenon that continues to spawn wildly popular books, movies, and musicals. Now, editors John Joseph Adams and Douglas Cohen have brought together leading fantasy writers such as Orson Scott Card and Seanan McGuire to create the ultimate anthology for Oz fans—and, really, any reader with an appetite for richly imagined worlds. Stories include:


- Frank Baum’s son has the real experiences that his father later fictionalized in Orson Scott Card’s “Off to See the Emperor.”
- Seanan McGuire’s “Emeralds to Emeralds, Dust to Dust” finds Dorothy grown up, bitter, and still living in Oz. And she has a murder to solve—assuming Ozma will stop interfering with her life long enough to let her do her job.
- In “Blown Away,” Jane Yolen asks: What if Toto was dead and stuffed, Ozma was a circus freak, and everything you thought you knew as Oz was really right here in Kansas?
- “The Cobbler of Oz” by Jonathan Maberry explores a Winged Monkey with wings too small to let her fly. Her only chance to change that rests with the Silver Slippers.
- In Tad Williams’s futuristic “The Boy Detective of Oz,” Orlando investigates the corrupt Oz simulation of the Otherland network.
- And more…

A note on suggested reading age: L. Frank Baum’s original Oz books were works of children’s fiction—albeit ones that have been known and loved by “children of all ages” throughout their existence. Though many of the stories contained in this anthology are also suitable for the aforementioned children of all ages, Oz Reimagined is intended for ages 13 and up, and as such, some of the stories deal with mature themes, so parental guidance is suggested.

This title is due for release on February 26, 2013
We'll send you an email as soon as it is available!