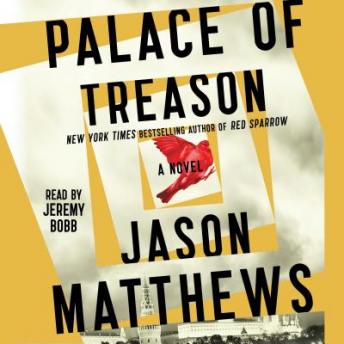 Palace of Treason: A Novel

#2 of The Red Sparrow Trilogy

Captain Dominika Egorova of the Russian Intelligence Service despises the oligarchs, crooks, and thugs of Putin’s Russia—but what no one knows is that she is also working for the CIA. Her “sparrow” training in the art of sexual espionage further complicates the mortal risks she must take, as does her love for her handler Nate Nash—a shared lust that is as dangerous as treason.

As Dominika expertly dodges exposure, she deals with a murderously psychotic boss, survives an Iranian assassination attempt and attempts to rescue an arrested double agent—and thwart Putin’s threatening flirtations. A grand, wildly entertaining ride through the steel-trap mind of a CIA insider, Palace of Treason is a story “as suspenseful and cinematic as the best spy movies” (The Philadelphia Inquirer)—one that feels fresh and so possible, in fact, that it’s doubtful this novel can ever be published in Russia.

It’s a good sequel from Red Sparrow but it can get a little long-winded at times. I was glad when I made it to the end even though it was a great journey.

At the end of Red Sparrow, I wasn't where Dominika's relationship with Nate was going to go. It seems by the end Dominika has chosen to live in her head as far as that relationship goes. What I mean is that she talks with him and spends time with him only in her head. There is no real-time spent together. Fortunately for her, Nate has been doing the same thing. I'm glad there was the reality of both sleeping with other people, or I probably would have thrown the book aside. But I once again saw that people are pawns and that they are dispensable. For all my complaints, it drew me in and kept me there. I couldn't do anything but listen.

as per usual, the story goes full tilt and the end of the chapter ends with a delicious description of preparing the dishes mentioned in the preceding chapter. A real tension breaker. Good listening but long.

Big fan of the genre and I think the author does a great job, as does the narrator. I listen as a way to pass the time on commutes too and from wherever. I like books that keep up a good pace, have good characters, clear plot-line, and are action packed. This fit the bill for sure, just downloaded sequel ( and listened to Red Sparrow before this one). Also cool that they incorporate food recipes - many sound delicious and give me ideas outside the world of books. Have fun !

Love it. Keeps me want to listen.

Getting tired of the recipes

Great true to life operations. Makes you feel like you are part of the story.

Enjoyed the continuation of the story from Red Sparrow. Good plot lines with new villains and heros but sometimes the spy craft detail gets a bit much.

The red sparrow was mr Matthews first novel. I loved it. Now he's written a squeal