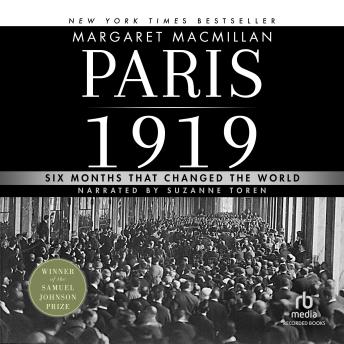 Winner of the Samuel Johnson Prize, renowned historian Margaret MacMillan's best-selling Paris 1919 is the story of six remarkable months that changed the world. At the close of WWI, between January and July of 1919, delegates from around the world converged on Paris under the auspices of peace. New countries were created, old empires were dissolved, and for six months, Paris was the center of the world. Bringing to vivid life the individuals who participated in the great Peace Conference--including Woodrow Wilson, Winston Churchill, Lawrence of Arabia, and Ho Chi Minh--Paris 1919 is a landmark work of narrative history.

Loved this book. It to understand all the problems of last hundred years we a result of bad decisions made by the allies in 1919.

Narrator was delightful. A bit lengthy, but the conference was so all encompassing and full of detail, that the length was understandable. Truly a unique world event that any history buff should read about. Highly recommend it.

A plethora of information. Couldn't absorb it all, however, it gave a great overview of the history of the times and how it evolved into WWII. I give the author much credit for all of the research performed. Would like to have the book in print in order to review some of the chapters.

Recommend for any history buff