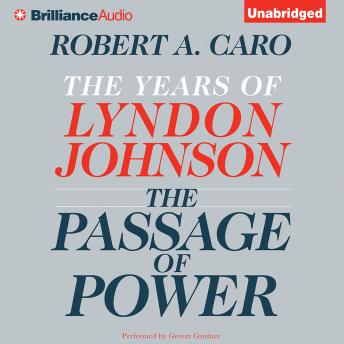 The Passage of Power

Part of The Years of Lyndon Johnson

The Passage of Power follows Lyndon Johnson through both the most frustrating and the most triumphant periods of his career — 1958 to 1964. It is a time that would see him trade the extraordinary power he had created for himself as Senate Majority Leader for what became the wretched powerlessness of a Vice President in an administration that disdained and distrusted him. Yet it was, as well, the time in which the presidency, the goal he had always pursued, would be thrust upon him in the moment it took an assassin’s bullet to reach its mark.
For the first time, we see the Kennedy assassination through Lyndon Johnson’s eyes. We watch Johnson step into the presidency, inheriting a staff fiercely loyal to his slain predecessor; a Congress determined to retain its power over the executive branch; and a nation in shock and mourning. We see how within weeks — grasping the reins of the presidency with supreme mastery — he propels through Congress essential legislation that at the time of Kennedy’s death seemed hopelessly logjammed and seizes on a dormant Kennedy program to create the revolutionary War on Poverty. Caro makes clear how the political genius with which Johnson had ruled the Senate now enabled him to make the presidency wholly his own. This was without doubt Johnson’s finest hour, before his aspirations and accomplishments were overshadowed and eroded by the trap of Vietnam.
It is an epic story told with a depth of detail possible only through the peerless research that forms the foundation of Robert Caro’s work, confirming Nicholas von Hoffman’s verdict that “Caro has changed the art of political biography.”

Awesome.We humans are complex and mixed. What a rich insight Caro provides into RFK, LBJ and the weird world of the USA. Hearing this audiobook the week that the Jan 6 committe is on TV makes you realise the deep roots of the white supremacist roots of the republicans. The maniuplation of elections and thedeep set corrruption that lies at the heart of US politics is not new. The born to rule brigade led by Trump can trace its roots to so many themes in this book. As an outsider I love the US and this book was a rich read to gain insights tothe mess it is in.

This title is due for release on May 1, 2012
We'll send you an email as soon as it is available!