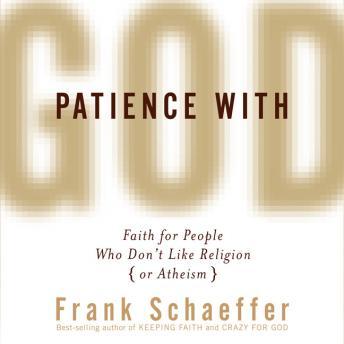 Patience with God: Faith for People Who Don't Like Religion (or Atheism)

Frank Schaeffer has a problem with Dawkins, Hitchens, Harris, Dennett, and the rest of the New Atheists-the self-anointed "Brights." He also has a problem with the Rick Warrens and Tim LaHayes of the world-the religious fundamentalists. The problem is that he doesn't see much of a difference between the two camps. As Schaeffer puts it, they "often share the same fallacy: truth claims that reek of false certainties. I believe that there is an alternative that actually matches the way life is lived rather than how we usually talk about belief."

Sparing no one and nothing, including himself and his fiery evangelical past, and invoking subtleties too easily ignored by the pontificators, Schaeffer adds much-needed nuance to the existing religious conversation. "I discovered from the emails I've been inundated with since my memoir was published that there are more of us perplexed former (or currently) religiously inclined or religiously raised folks on a journey from past certainties to points unknown than I'd been aware of. We want to have faith in God in spite of our bad experiences with religion, oppressive family relationships, and/or doubts and questions. We too worry that we have been hoodwinked by a fairy tale. I hope that this audio book will provide a meeting place for those of us who count ourselves among the scattered members of what I'll call the Church of Hopeful Uncertainty.

Patience with God: Faith for People Who Don't Like Religion (or Atheism)

This title is due for release on July 19, 2010
We'll send you an email as soon as it is available!