Pearl Harbor: Final Judgement: The Shocking True Story of the Military Intelligence Failure at Pearl Harbor and the Fourteen Men Responsible for the Disaster 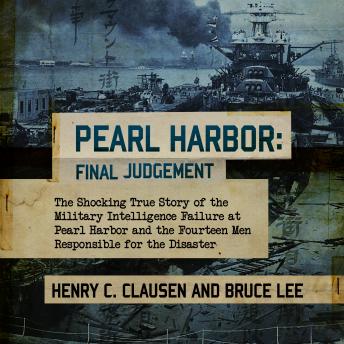 This account of the top secret investigation is 'essential history . . . the authoritative appraisal of why American armed forces met the Japanese attack asleep' (The Christian Science Monitor).
On December 6, 1941, Admiral Husband E. Kimmel, commander in chief of the United States Pacific Fleet, assured his staff that the Japanese would not attack Pearl Harbor. The next morning, Japanese carriers steamed toward Hawaii to launch one of the most devastating surprise attacks in the history of war, proving the admiral disastrously wrong. Immediately, an investigation began into how the American military could have been caught so unaware.
The results of the initial investigation failed to implicate who was responsible for this intelligence debacle. Secretary of War Henry L. Stimson, realizing that high-ranking members of the military had provided false testimony, decided to reopen the investigation by bringing in an unknown major by the name of Henry C. Clausen. Over the course of ten months, from November 1944 to September 1945, Clausen led an exhaustive investigation. He logged more than fifty-five thousand miles and interviewed over one hundred military and civilian personnel, ultimately producing an eight-hundred-page report that brought new evidence to light. Clausen left no stone unturned in his dogged effort to determine who was truly responsible for the disaster at Pearl Harbor.
Pearl Harbor: Final Judgement reveals all of the eye-opening details of Clausen's investigation and is a damning account of massive intelligence failure. To this day, the story surrounding the Japanese attack on Pearl Harbor stokes controversy and conspiracy theories. This book provides conclusive evidence that shows how the US military missed so many signals and how it could have avoided the events of that fateful day.

Pearl Harbor: Final Judgement: The Shocking True Story of the Military Intelligence Failure at Pearl Harbor and the Fourteen Men Responsible for the Disaster