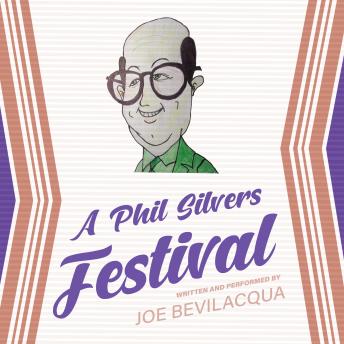 A Phil Silvers Festival is collection of tributes, parodies, and rarities of the great con man comedian-written, produced, and performed by Joe Bevilacqua. Bonus tracks feature remastered classic radio and TV broadcasts.
This set includes:
Jack Robinson at Your ServiceThe Wolf and the GoatThe Fox and the PenguinHis Second to Last BowThis Here is Your LifeRobin CatCommand PerformanceThe Tailor ShopAunt Sooty's NeighborThe Efficiency ExpertSlowly I TurnThe Slowest Gun in the WestJoe Bevilacqua, also known as Joe Bev, is a public radio producer and radio theater dramatist. However, his career has taken him into every aspect of show business, including stage, film, and television as a producer, director, writer, author, actor, journalist, documentarian, and even cartoonist. He is also a member of the Metropolitan Opera Company in New York City.
Phil Silvers (May 11, 1911 - November 1, 1985) was an American entertainer and comedic actor, known as "The King of Chutzpah". He starred in The Phil Silvers Show, a 1950s sitcom set on a U.S. Army post in which he played Master Sergeant Ernest (Ernie) Bilko.