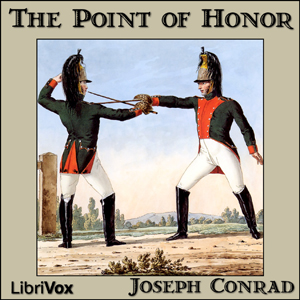 The Point of Honor

Set during the Napoleonic Wars, this story features two French Hussar officers, D'Hubert and Feraud. Their quarrel over an initially minor incident turns into a bitter, long-drawn out struggle over the following fifteen years, interwoven with the larger conflict that provides its backdrop. At the beginning, Feraud is the one who jealously guards his honor and repeatedly demands satisfaction anew when a duelling encounter ends inconclusively; he aggressively pursues every opportunity to locate and duel his foe. As the story progresses, D'Hubert also finds himself caught up in the contest, unable to back down or walk away.

This Conrad short story evidently has its genesis in the real duels that two French Hussar officers fought in the Napoleonic era. Their names were Dupont and Fournier, which Conrad disguised slightly, changing Dupont into D'Hubert and Fournier into Feraud. In 1977, it was turned into a movie, "The Duellists", starring Keith Carradine and Harvey Keitel. (summary adapted from Wikipedia)

This title is due for release on January 30, 2015
We'll send you an email as soon as it is available!