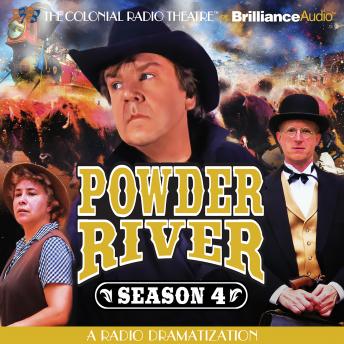 New England’s favorite TV Cowboy, Rex Trailer, guest stars in the two-part season opener, “Return of the Legend.” Britt MacMasters and his father track outlaw Jeb Pickett after the Stagecoach hold up - A new band of deadly outlaws appears in the territory as Doc is seriously injured in an explosion – While in Chicago, Britt once again meets famed singer Jenny White - When a young lady is the sole survivor of an Indian attack on a raft traveling on the Powder, Britt, Dawes and Doc try to prevent another uprising by the Sioux - The railroad arrives in Clearmont, bringing one thousand workers and trouble. These and many more exciting adventures from the entire fourth season of Powder River!

This title is due for release on June 11, 2012
We'll send you an email as soon as it is available!