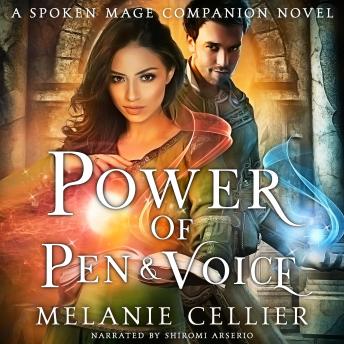 Power of Pen and Voice: A Spoken Mage Companion Novel

When a Sekali princess unexpectedly bursts into Elena and Lucas's betrothal celebrations, Ardann is forced to send a team to investigate her claims of a new enemy. The last thing Saffron expects, or wants, is to be called on to assist. But she can't risk disgracing her family by refusing to join the expedition.

Julian, on the other hand, leaps at the chance to distinguish himself and gain favour with the Sekalis by helping the princess. What he doesn't expect is to find himself equally interested in the chance to prove himself to an inconsequential Callinos girl he's only ever thought of as Finnian's shadow.

But the further the team goes into the mountains, the more mysteries they uncover. And with their usual defenses and compositions inexplicably failing, Saffron and Julian will have to rely on each other if they're to defend their kingdom and escape with both their hearts and lives intact.

Power of Pen and Voice

Power of Pen and Voice: A Spoken Mage Companion Novel

This title is due for release on January 21, 2021
We'll send you an email as soon as it is available!