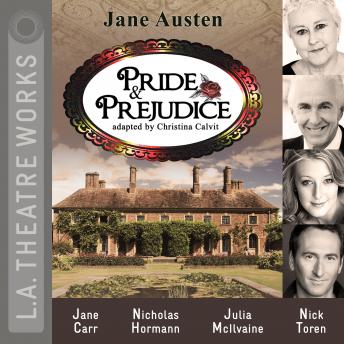 The dour, Mr. Darcy is anything but popular with the Bennets, especially when he fancies a member of their clan. And as Elizabeth reluctantly deals with Mr. Darcy’s advances, their romance seems destined to fail.

Jane Austen’s Pride and Prejudice set the standard for romantic comedies when it debuted in 1813, and it still speaks to audiences worldwide through countless adaptations.

Includes a roundtable interview with the entire cast.

Adapted for the stage by Christina Calvit. Directed by Brian Kite. Recorded by L.A. Theatre Works before a live audience.

The most outstanding audio book I’ve ever listened to, and one of my favorite books. I’ve been listening to this repeatedly for about 4 years now. I feel like an autist now.

meant to buy the book which I love. this is a condensed play did not care for it. did not finish.

It was an easy listen and funny. I wish it was longer and less of the audience laughing. It’s like listening to a play and all the characters have different voices.

Amazing???? and the accent is good the voice of narrator very clear

This title is due for release on April 15, 2013
We'll send you an email as soon as it is available!