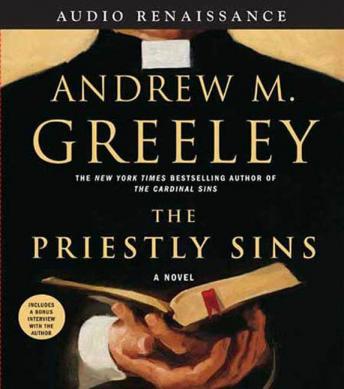 The Priestly Sins: A Novel

Not since his runaway bestseller, The Cardinal Sins, has Father Andrew Greeley written such a searing and topical novel about the state of the Catholic Church
The Priestly Sins tells the story of Father Herman Hoffman, a gifted and innocent young man, who becomes swept up in 'the Crisis' after witnessing child abuse in his first parish appointment. Soon, he is vilified for denouncing a priest who has been 'cleared.' He suffers the harsh fate of a whistle-blower when his Archdiocese has him committed to a mental health center. After his release, Father Hoffman is exiled by the Church to Chicago were he begins his graduate studies in immigrant history. There he encounters the legendary Monsignor Blackie Ryan, who helps him regain his confidence and demand a parish of his own. Reluctantly, the Church hierarchy assigns him to a dying parish. With zeal and charm,
he revives the local church. His brief idyll is shattered by a subpoena to testify in a court hearing. If he speaks he will have to once again take on the establishment that is determined to destroy him. He faces exile not only from his parish but from the priesthood itself.

This title is due for release on April 1, 2004
We'll send you an email as soon as it is available!