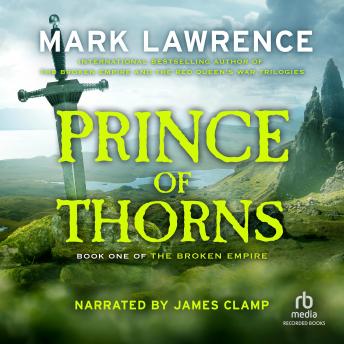 When he was nine, he watched as his mother and brother were killed before him. By the time he was thirteen, he was the leader of a band of bloodthirsty thugs. By fifteen, he intends to be king... It's time for Prince Honorous Jorg Ancrath to return to the castle he turned his back on, to take what's rightfully his. Since the day he hung pinned on the thorns of a briar patch and watched Count Renar's men slaughter his mother and young brother, Jorg has been driven to vent his rage. Life and death are no more than a game to him-and he has nothing left to lose. But treachery awaits him in his father's castle. Treachery and dark magic. No matter how fierce his will, can one young man conquer enemies with power beyond his imagining?

Bloody. Brutal. Very slow story. Just get tired of brutality just for the sake of it Quit trying to struggle through the slowness of the reader and the boring story

VIP pick. Written in first person , bounces from present time to 4 years earlier. Got a little lost trying to determine time frame as I listened. Read other reviews have to agree with some. A young teenager full of pride and arrogance. Gets his people killed, kills a few himself, and always seems to come back from the brink of death. Angel or devil sitting on his shoulder. At this point in series anyone guess which one.

It is a good story, narration is done well.

Great book with an extremely interesting anti-hero in Prince Jorg. Narrator is decent but not spectacular.

This book and the series, then the addition of Mark Lawrence's other series in the Broken Empire universe. Got me back into reading. I listen to the audiobooks back and forth to class and work. And sit and read in my free time. "A dark time comes. My time, if it offends you. Stop me."-Mark Lawrence

Of all the Lawrence I have read this is the least enjoyable. The protagonist is a whiny little teenager who shows none of the maturity his admittedly difficult life and time on “ the road” should have given him. No redeeming value and so thoroughly unlikable that I can’t bring myself to go any further in the series. The plot is built around his arrogance and the knowledge that no matter what happens he’ll be fine so his stupidity and lack of strategy should s so often rewarded by blind luck that the story loses all sense of reality. I know it’s fantasy but still. Liked The Sisters Series but if Red Knight is not better I’m done with Lawrence.

Loved every part of this series. Captivating story that doesn't spare the gore. Great Narrator too.

I really enjoyed listening to this book. I thought the narration was excellent and I love the how the main character has an evil side. Good read!

This title is due for release on July 20, 2012
We'll send you an email as soon as it is available!