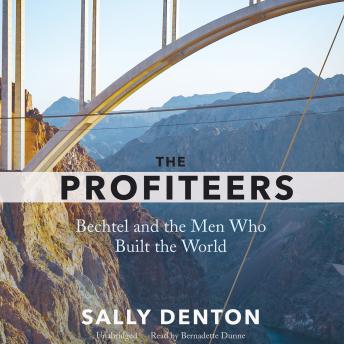 The Profiteers: Bechtel and the Men Who Built the World

The tale of the Bechtel family dynasty is a classic American business story. It begins with Warren A. "Dad" Bechtel, who led a consortium that constructed the Hoover Dam. From that auspicious start, the family and its eponymous company would go on to build the world, from the construction of airports in Hong Kong and Doha, to pipelines and tunnels in Alaska and Europe, to mining and energy operations around the globe.

Today Bechtel is one of the largest privately held corporations in the world, enriched and empowered by a long history of government contracts and the privatization of public works, made possible by an unprecedented revolving door between its San Francisco headquarters and Washington. Bechtel executives John McCone, Caspar Weinberger, and George P. Shultz segued from leadership at the company to positions as director of the CIA, secretary of defense, and secretary of state, respectively.

Like all stories of empire building, the rise of Bechtel presents a complex and riveting narrative. In The Profiteers, Sally Denton exposes Bechtel's secret world and one of the biggest business and political stories of our time.

"A taut, page-turning narrative detailing the company's machinations under five generations of family leadership...Filled with stories of cronyism and influence peddling, Denton's riveting and revealing book will undoubtedly displease the so-called 'boys from Bechtel,' who refused to talk to Denton, referring her to the company website."-Kirkus Reviews (starred review)

Profiteers: Bechtel and the Men Who Built the World