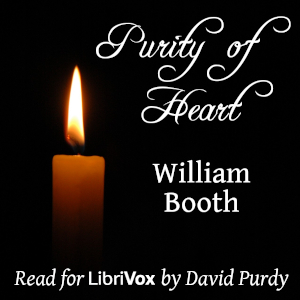 William Booth, who co-founded The Salvation Army with his wife Catherine in 1865, wrote several books on the subject of holiness. Purity of Heart, which was first published in 1902, is one of the most concise of these books. Its chapters were originally open letters Booth wrote and circulated throughout The Salvation Army to be read aloud as a ten-week sermon series on the subject of purity of heart. In the first letter, Booth explains what he means by the phrase "purity of heart", and the subsequent sermons build on this theme. Each letter focuses on a different aspect of holiness, such as reasons that a pure heart is desirable, the way to become holy, and examples of people whose hearts have been purified. In accordance with their initial purpose, the letters have a structure that is typical of Salvationist preaching; many of the letters begin with a summary of the previous week's message, include frequent appeals to quoted hymn lyrics throughout, and conclude with an altar call. Although the letters together form what could be considered a Salvationist theology of holiness, this book is less a theological treatise than an impassioned call to holiness by a vibrant preacher who eagerly wishes to cast aside any obstacles his hearers may encounter in seeking it, whether those obstacles be misunderstandings, false beliefs, reasoned objections, or insufficient desire. - Summary by David Purdy