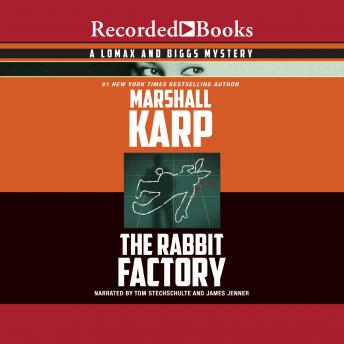 Marshall Karp is an acclaimed playwright known for his witty sense of humor and crackling dialogue. His debut novel The Rabbit Factory stars the irreverent LAPD detective duo of Mike Lomax and Terry Biggs. Dean Lamaar is the architect of an entertainment empire and the creator of iconic characters like Rambunctious Rabbit and McGreedy the Moose. When his company falls on hard times, the only hope to get it back in the black is Familyland-an amusement park in Las Vegas. Mere days before the grand opening, an actor playing Rambunctious Rabbit is found dead on the park grounds and everyone senses foul play. Someone's out to get Lamaar, and if Lomax and Biggs can stop bickering long enough, they just might find out who it is before more people get knocked off. This rollicking tale is at once a multi-layered whodunit and a skewering of Tinseltown. Tom Stechschulte's and James Jenner's performances give perfect voice to all of Karp's eccentric characters

This title is due for release on November 27, 2009
We'll send you an email as soon as it is available!