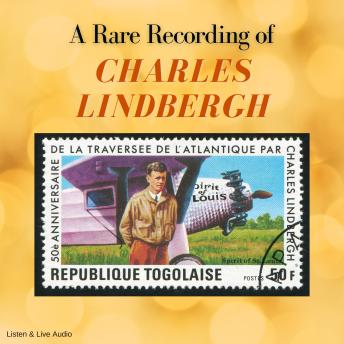 A Rare Recording of Charles Lindbergh

As a 25-year-old U.S. Air Mail pilot, Lindbergh emerged from virtual obscurity to instantaneous world fame as the result of his Orteig Prize-winning solo nonstop flight on May 20-21, 1927, made from the Roosevelt Field in Garden City on New York's Long Island to Le Bourget Field in Paris, France, a distance of nearly 3,600 statute miles, in the single-seat, single-engine, Spirit of St. Louis. As a result of this flight, Lindbergh was the first person in history to be in New York one day and Paris the next. The record setting flight took 33 hours and 30 minutes. The following recording is from 1927.

This title is due for release on February 18, 2016
We'll send you an email as soon as it is available!