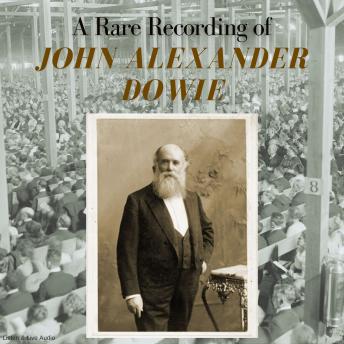 John Alexander Dowie (1847 - 1907) was a Scottish evangelist and faith healer who came to San Francisco in 1888 and built up a following by performing faith healing across the state. Later, Dowie gained fame by renting property adjacent to the World's Fair in Chicago in 1893. There he staged elaborate "Divine Healings" in front of large audiences. In 1900, he announced the founding the city of Zion, 40 miles from Chicago, where he owned all the property personally. He established a range of businesses, healing homes, and a large Tabernacle. Dowie was for total reliance on divine healing and against the use of all forms of medicine. Dowie was a forerunner of Pentecostalism, and many of his followers became influential figures in the early twentieth century revival.

This title is due for release on October 24, 2016
We'll send you an email as soon as it is available!