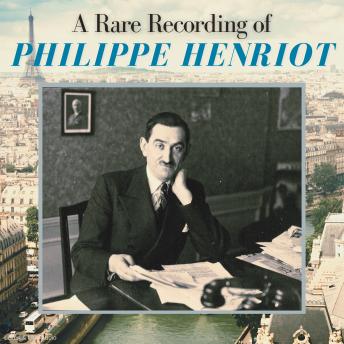 A Rare Recording of Philippe Henriot

Philippe Henriot (January 7, 1889 - June 28,1944) was a French poet, journalist, and politician. In 1940, after the surrender of France to Germany, Henriot became active as a journalist working for the French government headed by Philippe Pétain which had moved to Vichy. In December 1943, he was appointed Secretary of State for Information, broadcasting war propaganda through Radio Paris warning the French people about any association with the Allies or "terrorists" (resistance groups), and countered the arguments of the Free French Forces broadcasting from the BBC. With mesmerizing rhetoric and delivery, Henriot reportedly became an influential media star with a large and diverse audience. It was said that Henriot was listened to by both enemies and supporters. Consequently, Henriot was a target for the Résistance. On June 28, 1944, in the Ministry building where he lived, Henriot was assassinated by an anti-Vichy group. Henriot was afforded a state funeral in Paris in Notre Dame Cathedral where thousands filed past his coffin, surrounded by French flags and flowers, to mourn him--less than two months before the Liberation of Paris. This recording is in Henriot's native French language.

This title is due for release on May 5, 2021
We'll send you an email as soon as it is available!