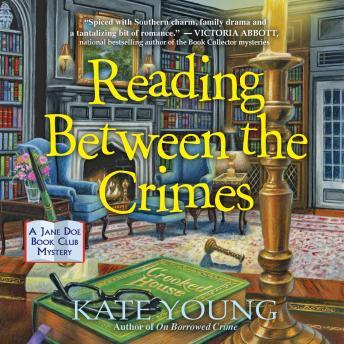 Reading Between the Crimes

What better time than Halloween to dig into a bracing discussion of a diabolical murder mystery? And what better choice for the Jane Doe Book Club than Agatha Christie's Crooked House? Lyla Moody and her friends are soon embroiled in debate over whether the heroine's actions are particularly believable. But not long after the meeting, sleepy Sweet Mountain, Georgia, is rocked by a murder that uncannily echoes the novel in question. When Lyla and her grandmother arrive at the charity event that Lyla's mother is hosting, they barely have time to hang up their fall jackets before they stumble upon a body in the library. Leonard Richardson, it seems, was robbed and then hit over the head with a brass candlestick—which throws suspicion on Harper Richardson, his young widow and a friend of the Jane Does. Lyla and the rest of the Jane Does pool their prodigious intellects to clear Harper's name. Peculiarly, all of the clues seem to have been lifted directly from the plot of Crooked House. But as Lyla probes the pages of Christie's classic whodunnit for hints, she uncovers secrets from her mother's past—secrets that suggest that Lyla's own house may be crooked as well.