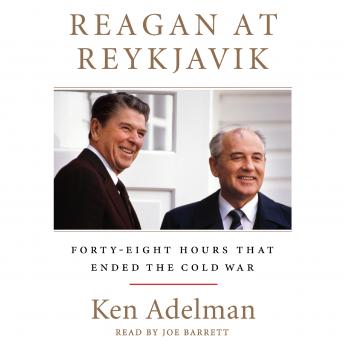 Reagan at Reykjavik: Forty-Eight Hours That Ended the Cold War

The dramatic, first-hand account of the historic 1986 Reagan-Gorbachev summit in Iceland—the definitive weekend that was the key turning point in the Cold War—by President Reagan’s arms control director, Ken Adelman.

In October 1986, Ronald Reagan and Mikhail Gorbachev met for a forty-eight-hour summit in Reykjavik, Iceland. Planned as a short, inconsequential gathering to outline future talks, the meeting quickly turned to major international issues, including the strategic defense initiative and the possibility of eliminating all nuclear weapons—negotiations that laid the groundwork for the most sweeping arms accord in history the following year.

Scrupulously researched and based on now-declassified information, Reagan at Reykjavik tells the gripping tale of this weekend that changed the world. Filled with illustrative accounts of the private discussions between Reagan and his team, Ken Adelman provides an honest and up-close portrait of President Reagan at one of his finest and most challenging moments.

Reagan at Reykjavik includes 16 pages of black-and-white photos and 11 illustrations.