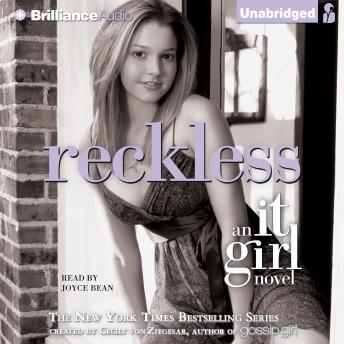 Reckless: An It Girl Novel

#3 of The It Girl Series

When Jenny Humphrey arrived at Waverly Academy, the student body immediately started buzzing about her and her body. She quickly caught the eye of three of the hottest guys on campus, kissed two of them, and made one her boyfriend: the adorable Easy Walsh. Too bad Easy just happened to belong to somebody else—Jenny’s roommate, Callie Vernon.It didn’t take long for powerful Tinsley Carmichael to tell Callie their sweet-faced new roommate was really a manipulative skank. So what if Tinsley herself stole a guy out from under their other roommate Brett Messerschmidt’s perky little nose? Then Callie and Tinsley threw Jenny and Brett out of their ultra-exclusive club. And just like that, it was war.Now the four roommates have been split up across enemy lines—Jenny and Callie are living together in Dumbarton 303, and Brett and Tinsley are seemingly miles away downstairs. What will happen when Easy sneaks in to see Jenny...but finds Callie instead? And what if Brett discovers the one secret Tinsley’s kept hidden for years?Everyone at Waverly is watching and whispering. With girls this wild, anything can happen, but only one can be it.

This title is due for release on November 1, 2006
We'll send you an email as soon as it is available!