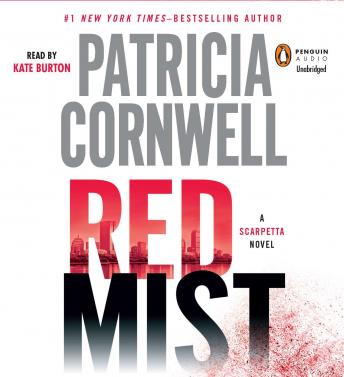 The new Kay Scarpetta novel from the world's #1 bestselling crime writer. Determined to find out what happened to her former deputy chief, Jack Fielding, murdered six months earlier, Kay Scarpetta travels to the Georgia Prison for Women, where an inmate has information not only on Fielding, but also on a string of grisly killings. The murder of an Atlanta family years ago, a young woman on death row, and the inexplicable deaths of homeless people as far away as California seem unrelated. But Scarpetta discovers connections that compel her to conclude that what she thought ended with Fielding's death and an attempt on her own life is only the beginning of something far more destructive: a terrifying terrain of conspiracy and potential terrorism on an international scale. And she is the only one who can stop it.

Loved it. At first I was afraid the narrator was going to be crappy because I was use to Kate Reading, but Kate Burton was fabulous! The narrator makes or breaks the book to me.

It was what I expect from this series. It has lots of plot twists and ongoing involvement with characters from past books. I like to listen to them on road trips.

This title is due for release on December 6, 2011
We'll send you an email as soon as it is available!