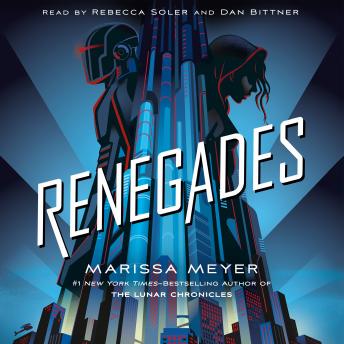 'Both narrators bring authenticity to the young characters...this fun and surprisingly thoughtful superhero tale will be a rewarding listen.' — AudioFile Magazine

From #1 New York Times-bestselling author Marissa Meyer, comes a high-stakes world of adventure, passion, danger, and betrayal. This new audiobook will pull listeners in and never let them go...

The Renegades are a syndicate of prodigies—humans with extraordinary abilities—who emerged from the ruins of a crumbled society and established peace and order where chaos reigned. As champions of justice, they remain a symbol of hope and courage to everyone...except the villains they once overthrew.

Nova has a reason to hate the Renegades, and she is on a mission for vengeance. As she gets closer to her target, she meets Adrian, a Renegade boy who believes in justice—and in Nova. But Nova's allegiance is to a villain who has the power to end them both.

Renegades is the next hit YA audiobook listeners have been waiting for!

such a good book! Great narrators!

This book is absolutely amazing and left me angry and frustrated. I can not WAIT for the second part.

This author is my favorite of all. Every book has a special feeling to it.

I struggle with this review because I dont know if it was meant for a very young audience. As a result I can't tell if the gaping holes in the story are because the writer didn't write for an audience that would notice it, or just bad writing. Instead I'll say this: if you expect a story with sensible characters and plot points that make sense, this isn't that. This story employs a lot of "this makes sense because the story would fall apart otherwise," plot points. I dont just mean, its about superheroes so of course it doesn't make sense. I mean basic logic doesn't exist in this story. For example, if you're quarantined for everyone's safety. One would logically think you would be guarded accordingly. Unless of course it would ruin a plot point. That's the kind of writing you should expect in this story. If you can look past that. Its a decent story.

Better than I expected.

I found the male reader a little old sounding but he was still pretty good, it didn’t take much away from the reading of it. The female was excellent..