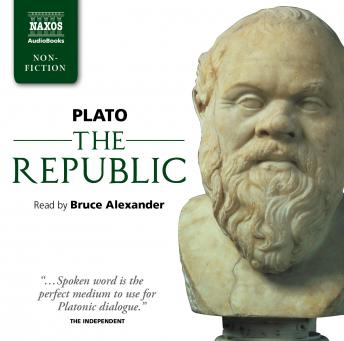 One of the key works of world philosophy, Plato's The Republic sets out to consider the principles behind an ideal city state. This is the first audio recording of Plato's great classic in a new translation by the Greek scholar Tom Griffith. No sooner than Bruce Alexander had left the studio having recorded Thomas Hardy, he was back at his Oxfordshire home studying hard for the next Naxos AudioBooks project Plato's The Republic. 'There couldn't have been a greater contrast - the deeply emotional Hardy, and the rationalist character of Socrates,' admitted Bruce Alexander. And both are about as far away possible from the character for which he is probably best known, Superintendent Mullett in the British TV series A Touch of Frost. 'That is what being an actor is all about,' declared Alexander. 'The worst thing for us is when are typecast, which can happen so easily.' Fortunately, this happens less the Audiobook/radio medium than on or film where visual concerns can be paramount.' This recording of The Republic uses the new translation by Tom Griffith, who prepared it for Cambridge University Press. It will be released by CUP in the near future, but is 'previewed' by this abridgement made by the translator himself. 'I started translating because I found that when I was teaching, and read from existing translations, I could see the interest fade from my pupils' eyes, explained Griffith. 'But I know this can capture the imagination and thoughts of young people, and so I started translating passages in language which was as contemporary as the original would have been in the fifth century B. C.' The Republic is one of a number of translations he has now included - among others is Symposium.

The first argument is on Just and justice. It is interesting to see how the definition of "justice" in recent decades has moved so far away from "just", as Plato narrates. He conceptualizes the basic characteristics of a functioning city/state. To overcome the complexity of "justice" he enumerates what is needed in a functioning city and he calls the remaining as "Justice". It turns out, what remains is to be competent and he calls that "being just", "having justice". Although widely known as a book on ideal city, Socrates mostly goes beyond and analyzes how a political system can degenerate or evolve to other systems. Based on my understanding, the whole idea of narrating an ideal city is to understand other systems and their fate.

This title is due for release on April 18, 2001
We'll send you an email as soon as it is available!