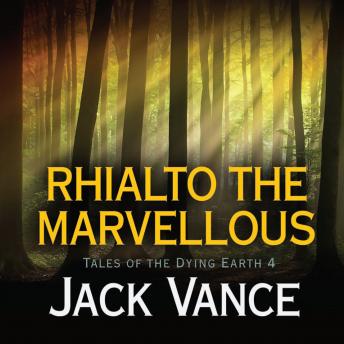 #4 of Tales of the Dying Earth

Rhialto the Marvellous takes up the personal and political conflicts among a conclave of two dozen magicians of Ascolais and Almery in the 21st Aeon. The shocking appearance of the Llorio the Murtha, a powerful female force from an earlier aeon threatens to unbalance nature by “ensqualming” or feminizing the magicians. This triggers a tremendous struggle for power and the other mages turn against Rhialto.

Hoping to reestablish his rightful place, Rhialto travels to other aeons to restore the missing Perciplex which projects the Mostrament, the constitution of the association. In his final adventure, Rhialto must, ultimately, travel to the very ends of time and space to confront an old adversary whom he had wronged and must commit further misdeeds to restore order.

Out of this welter of exotic politics, values systems, personal eccentricity, and magic, the figure of Rhialto slowly comes into focus and takes on dimension. He is a vain, apparently superficial man, not ashamed to demonstrate his melancholy to enhance his reputation. But he is courteous, patient, and subtle, even kind. He is self-aware and introspective as Cugel never could be—the wisest and most sympathetic of all of Vance’s wizards.

This title is due for release on May 15, 2010
We'll send you an email as soon as it is available!