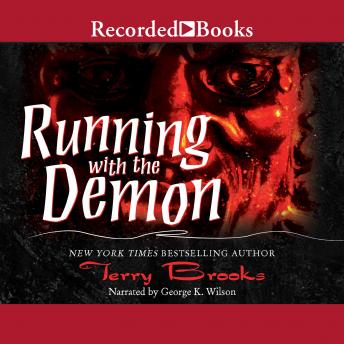 Running with the Demon

Twenty years ago, New York Times best-selling author Terry Brooks published the first fantasy novel ever to hit the mainstream best-seller lists. Once again he breaks new ground in Running with the Demon, convincing listeners that impossible villains and heroes actually coexist with us in our everyday world. On a very hot Fourth of July weekend, two strangers appear in Hopewell, Illinois, in the middle of a bitter steel strike. One, a Demon of the Void, will use the angry steel workers to attain his own terrible ends. The other, a Knight of the Word, dreams about a nightmarish future and spends every waking moment desperately trying to change its course. The fate of the town and, ultimately, of humanity, depends on one exceptional 14-year-old girl, the only one who can see the otherworldly creatures that have begun to invade her home town. George Wilson's narration powerfully conveys the apocalyptic magnitude of this novel of good versus evil. Mystery and suspense blend to keep the listener involved to the very last word.

Thus small series is a favorite of mine and George Wilson does such a great job narrating it.

A better story IMHO than his more well-known shanarra books. The depiction of a kids life in the late70s felt very authentic too

was ok. I enjoyed the ending. looking forward to book2 and 3. audio quality wasnt very good. sounds like it was recorded in 1970.

I read this book when it came out back in 1997 and it still holds up today. This marks the beginning of linking our world to the Shannara series. Hi writing here is a mix of fantasy and horror and I like the development of the protagonists Nest Freemark and John Ross. The antagonist is also appropriately scary but the twist was a little too telegraphed for my taste. No enough characters to keep the mystery intact. Over all a great read and the entry point for folks wanting to re-read the series from in-world chronological order.

I did feel that this story had some slow spots. But after getting into it. I wanted to hear more.

Picked it based off the reviews from the VIP options and was not disappointed. Just downloaded the second and am happy its a series since the ending leaves you wanting more, but could also stand on its own.

Fun different not what I expected but I thoroughly enjoyed it

Love the characters and the way the story rolls. Hard to put down!

Good story and narration. The Elfstones of Shannara and the Wishsong of Shannara are still my favorite Terry Brooks stories and they rate 5 stars (rated Running with the Demon 4 stars). Running with the Demon starts off a little slow and it takes a little while to get used to seeing the possible futures in John Ross's dreams but later picks up the pace as you get to know and like some of the characters. Am enjoying hearing the prequils of the Shannara series. Narration is good and has to do a lot of different voices in the book.

This title is due for release on November 8, 2013
We'll send you an email as soon as it is available!