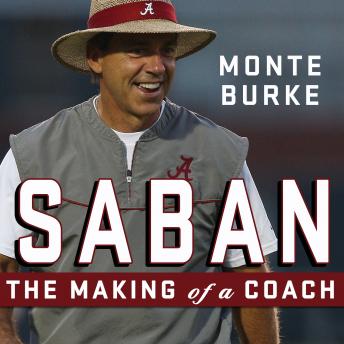 Saban: The Making of a Coach

As the head coach of the University of Alabama's football team, Nick Saban is perhaps the most influential-and controversial-man in the sport. Unpredictable in his professional loyalties, uncompromising in his vision, and unyielding in his pursuit of perfection, the highest-paid coach in college football has changed the face of the game. His program-building vision has delivered packed stadiums, rabid fans, legions of detractors, countless NFL draft picks, and a total of four national championships, including three in the last five years.
Though a great deal is known about Nick Saban the coach, not much is known about Nick Saban the man. Through unprecedented interviews with more than 250 friends, coworkers, rivals, former players, and others, Monte Burke reveals the defining moments of the coach's life. He discusses Saban's rapid and at times rocky ascent up the assistant coaching ranks; his complicated relationship with one of his coaching mentors, Bill Belichick; the birth of his now-famous 'Process;' his dramatic and controversial departures from three different high-profile football teams; and much more.
Saban paints a portrait of a complex and compelling man, fundamentally shaped by both his past and the game he loves, in a way that no previous book has.

Saban: The Making of a Coach

This title is due for release on August 4, 2015
We'll send you an email as soon as it is available!