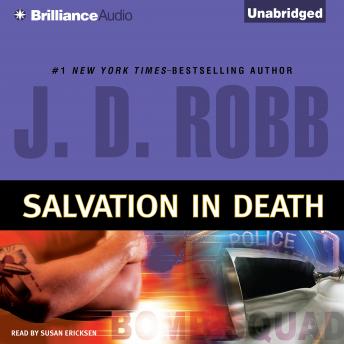 In the year 2060, cutting-edge investigative tools can help catch a killer. But there are some questions even the most advanced technologies cannot answer. . . .
At the most solemn moment of a Catholic funeral Mass, the priest brings the chalice to his lips. Seconds later, he is dead on the altar.
For the mourners packed into the pews, Father Miguel Flores's sudden demise is an unimaginable shock. When Detective Lieutenant Eve Dallas confirms that the consecrated wine contained enough potassium cyanide to kill a rhino, she's prepared to plunge in and find out why, despite her discomfort with her surroundings. It's not the bodegas and pawnshops of East Harlem that bother her; it's all that holiness flying around St. Cristobal's that makes her uneasy.
The autopsy reveals scars from knife wounds, a removed tattoo, and evidence of plastic surgery, suggesting 'Father Flores' may not have been the man his parishioners thought. Now, as Eve pieces together clues that suggest identity theft, gang connections, and a deeply personal act of revenge, she hopes to track down whoever committed this unholy act. Until a second murder - in front of an even larger crowd of worshippers - knocks the whole investigation sideways.
The way Eve sees it, vengeance may be the Lord's business, but if there's going to be any earthly justice in this case, it's up to her.

This title is due for release on November 1, 2008
We'll send you an email as soon as it is available!