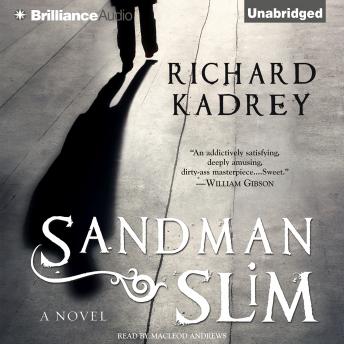 Life sucks, and then you die. Or, if you’re James Stark, you spend eleven years in Hell as a hitman before finally escaping, only to land back in the hell-on-earth that is Los Angeles.

Now Stark’s back, and ready for revenge. And absolution, and maybe even love. But when his first stop saddles him with an abusive talking head, Stark discovers that the road to absolution and revenge is much longer than you’d expect, and both Heaven and Hell have their own ideas for his future.

Darkly twisted, irreverent, and completely hilarious, Sandman Slim is the breakthrough novel by an acclaimed author.

The main hero is constantly too angry and self pitying. Narration is good.

Interesting anti-hero story. A few good laughs. I'm interested to see where this will go. I'm SUPER picky about narration, I like this one.

This title is due for release on July 21, 2009
We'll send you an email as soon as it is available!