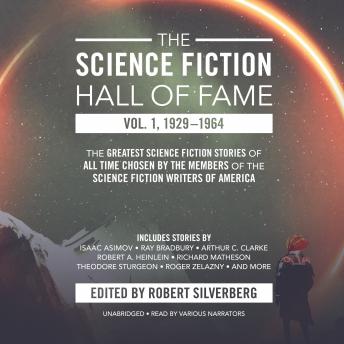 Written By: others , Arthur C. Clarke, Robert A. Heinlein

The definitive collection of the best in science fiction stories between 1929 and 1964.This book contains twenty-six of the greatest science fiction stories ever written. They represent the considered verdict of the Science Fiction Writers of America, those who have shaped the genre and who know, more intimately than anyone else, what the criteria for excellence in the field should be. The authors chosen for the Science Fiction Hall Fame are the men and women who have shaped the body and heart of modern science fiction; their brilliantly imaginative creations continue to inspire and astound new generations of writers and fans.In "The Roads Must Roll," Robert Heinlein describes an industrial civilization of the future caught up in the deadly flaws of its own complexity. "Country of the Kind," by Damon Knight, is a frightening portrayal of biological mutation.

"Nightfall," by Isaac Asimov, one of the greatest stories in the science fiction field, is the story of a planet where the sun sets only once every millennium and is a chilling study in mass psychology.Originally published in 1970 to honor those writers and their stories that had come before the institution of the Nebula Awards, The Science Fiction Hall Of Fame, Vol. 1, was the book that introduced tens of thousands of young readers to the wonders of science fiction. Too long unavailable, this new edition will treasured by all science fiction fans everywhere.This collection also includes an introduction by Robert Silverberg and stories by Stanley G. Weinbaum, John W. Campbell, Lester del Rey, Theodore Sturgeon, Lewis Padgett, Clifford D. Simak, Fredric Brown, Murray Leinster, Judith Merril, Cordwainer Smith, Ray Bradbury, C. M. Kornbluth, Richard Matheson, Fritz Leiber, Anthony Boucher, James Blish, Arthur C. Clarke, Jerome Bixby, Tom Godwin, Alfred Bester, Daniel Keyes, and Roger Zelazny.

by others , Arthur C. Clarke, Robert A. Heinlein