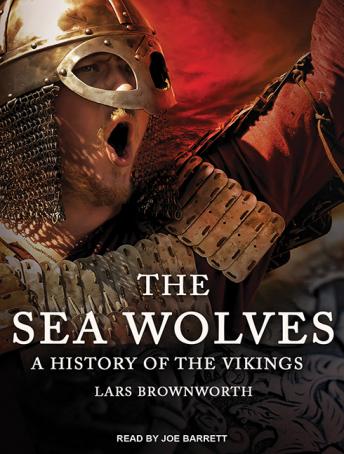 The Sea Wolves: A History of the Vikings

In AD 793, Norse warriors struck the English isle of Lindisfarne and laid waste to it. Wave after wave of Norse 'sea wolves' followed in search of plunder, land, or a glorious death in battle. Much of the British Isles fell before their swords, and the continental capitals of Paris and Aachen were sacked in turn. Turning east, they swept down the uncharted rivers of central Europe, captured Kiev, and clashed with mighty Constantinople, the capital of the Byzantine Empire.

But there is more to the Viking story than brute force. They were makers of law-the term itself comes from an Old Norse word-and they introduced a novel form of trial by jury to England. They were also sophisticated merchants and explorers who settled Iceland, founded Dublin, and established a trading network that stretched from Baghdad to the coast of North America.

In The Sea Wolves, Lars Brownworth brings to life this extraordinary Norse world of epic poets, heroes, and travelers through the stories of the great Viking figures, including Leif the Lucky, Eric Bloodaxe, and Harald Hardrada. This riveting history illuminates the saga of the Viking age-a time which 'has passed away, and grown dark under the cover of night.'

The information within the book is informative and interesting,however the narration was not to my liking. I could not get used to the soft almost uninterested American / Canadian accent of the narrator. Do not listen whilst driving - He’ll put you to sleep!

Very interesting history. I didn’t realize the impact the early northmen had on European history. That was such a brutal era. I was particularly intrigued by the authors conclusion that painted the overall Viking influence as positive despite their continual mayhem because it resulted in more diverse and united countries. Same argument is made about the Kahns later reign of terror on humanity. Basically you have to break it before you can fix it. Personally, I have a more positive outlook on humanity than that.

I found this an very interesting and informative book, well researched and comfortably presented,with a very pleasant narrator.

Narrator had excellent voice throughout. Great information on a long forgotten age. Thoroughly enjoyed it.

If you can make it past the first 2 1/2 hours the book becomes quit interesting.

Interesting book however there was numerous repeats of describing the techniques of the Vikings. I would think it could have been described as “once again” or “their notorious ways of handling the conquered” ... All in all, it was good history.