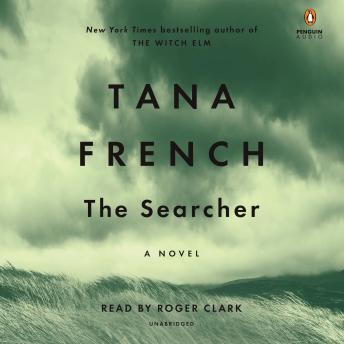 The Searcher: A Novel

'This hushed suspense tale about thwarted dreams of escape may be her best one yet . . . Its own kind of masterpiece.' --Maureen Corrigan, The Washington Post

'A new Tana French is always cause for celebration . . . Read it once for the plot; read it again for the beauty and subtlety of French's writing.' --Sarah Lyall, The New York Times

Cal Hooper thought a fixer-upper in a bucolic Irish village would be the perfect escape. After twenty-five years in the Chicago police force and a bruising divorce, he just wants to build a new life in a pretty spot with a good pub where nothing much happens. But when a local kid whose brother has gone missing arm-twists him into investigating, Cal uncovers layers of darkness beneath his picturesque retreat, and starts to realize that even small towns shelter dangerous secrets.

'One of the greatest crime novelists writing today' (Vox) weaves a masterful, atmospheric tale of suspense, asking how to tell right from wrong in a world where neither is simple, and what we stake on that decision.

A really good and interesting story filled with unique characters. I thought that the narrator was one of the best I have heard. His reading was well paced, he did the Irish accents beautifully, and his voice was mellifluous. This was my first Tana French novel.

slow and mysterious. excellent writing, excellent unfolding of the story.

Narration was great. Book not so much. I was expecting a psych thriller. Was not at all, could’ve been about half the length - or less

Good story with interesting characters and the narrator was great

Loved the Irish phrases and characters. The story was basic, but herald my interest.

It reminds me of another story with oscar win! a little slow in the first half of the story.

The most boring book of the season. Why would I ever believe The NY Times List??? Even the narrator became irritating. So sad to waste my time and money.

Love all of her books but this one doesn’t even sound like her. It sounds more like a travelogue to fill up space. I would not recommend it.

I enjoyed the book and learned a few things about Ireland and it’s customs. The story was believable and the characters were well developed. Narration was great too! Different voice for each character. Good mystery. I love Tana French. I was drawn to her because my sister’s name is Tana, and it is an unusual name.

I really like Tana French and have read all her books. This one seemed more plain to me. There wasn’t as much dark twists and flawed human in-depth personality exploration that she is known and I was expecting. I was hoping this was going to be a good Halloween-timeframe listen but didn’t end up that way. This was good, just not great. The narrator was fantastic however so it was definitely overall enjoyable.

Pretty good as a murder mystery, but did lag somewhat in the beginning. I liked the humor sprinkled in, and the narrator had a great Irish brogue.