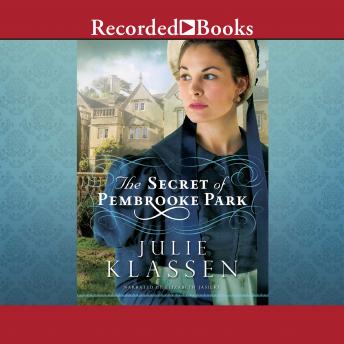 The Secret of Pembrooke Park

Julie Klassen Is the Top Name in Inspirational regency Romance Abigail Foster fears she will end up a spinster, especially as she has little dowry to improve her charms and the one man she thought might marry her-a longtime friend-has fallen for her younger, prettier sister. When financial problems force her family to sell their London home, a strange solicitor arrives with an astounding offer: the use of a distant manor house abandoned for eighteen years. The Fosters journey to imposing Pembrooke Park and are startled to find it entombed as it was abruptly left: tea cups encrusted with dry tea, moth-eaten clothes in wardrobes, a doll's house left mid-play ... The handsome local curate welcomes them, but though he and his family seem to know something about the manor's past, the only information they offer Abigail is a warning: Beware trespassers who may be drawn by rumors that Pembrooke contains a secret room filled with treasure. Hoping to improve her family's financial situation, Abigail surreptitiously searches for the hidden room, but the arrival of anonymous letters addressed to her, with clues about the room and the past, bring discoveries even more startling. As secrets come to light, will Abigail find the treasure and love she seeks ... or very real danger?

fantastic narration. Memorable voices throughout the book with suspense. Really enjoyed the book.

Fabulous read, I love how Julie Klassen's characters come alive so much that I "miss" them when I finish the novels!

Good listen, although not my favoriteJulie Klassen. Dragged a bit in places. Narrator excellent. Liked The Silent Governess better.

Held my interest the whole time!! Many twists and turns great book and the ending delivers!

I enjoyed the narrator and the plot. I will look for more books by this author.

Sloooooow to start and got a bit too “religion-y” near the end, but a good mystery to solve and a good ending. Narrator was a bit high-brow sounding in the beginning but I got used to it.

I loved this listen. I could hardly put it down. often, I dismiss the details surrounding the plot. not this time. the description was so artfully stated I could see the house and all its grandeur the description of the gowns, everything wasn't boring as I usually think. The narration was superb. I had no trouble discerning between the characters, and there was none of that tedious, "he said,"she said. " That plagues a lot of audiobooks.if you like historical novels, with a bit mystery and romance, this listen is for you!

I found the narrator’s voice a bit whiny at first but it improved. Story keeps you interested to the end although it’s a bit far fetched.

Oh my gosh I loved this book! Couldn’t put it down! It’s totally not my usual genre but it captivated me from the word go. Plenty of twists and turns, some more obvious than others and a gentle love story to pull it all together. A simply delightful read! And kudos to the narrator for managing all those different voices and characters!

Another great book by Klassen and great narration by Jasicki!

I actually enjoyed this book much more than I expected! It was engaging and kept you guessing.

This was a good listen.. well written and enjoyed the story!

The story line held my interest and the Formality and etiquette of the period was well portrayed.

I think that Julie Klassen writes good books - and Elizabeth Jasicki is a good Narrator!

It was better than I thought it would be, but pretty predictable.

I really enjoyed this book!

Narrator was really great. Dragged a bit..... could have easily been shorter a couple of hours.

I honestly don’t really know what that was.

I enjoyed this book very much with it’s twists, secrets, crime, mystery and love story. It was my first read by Julie Klassen and I will be back for more. It kept the reader hanging for answers. The narration took me a moment to get used to, but very well vocalised. Five stars from me.

Loved this story and the narrator did an excellent job.

If you love classics like Pride and Prejudice, Mansfield Park, Sense and Sensibility, you will love this book. The Narration is so perfect for every character. A great period set love story with intrigue.

This is a super good read with great character development. Narrator did a fantastic job!! Believable story!

I loved this book. Narration was great also.

I really enjoyed the story and characters

Beautifully narrated and a most genteel mystery, taking the listener to another time in history with grace and eloquence.

I really enjoyed this book. Suspenseful and enduring. I loved the narrator and story line. It was a good find!

i really enjoyed this book! the narration was wonderful. i will read it again.

This title is due for release on December 2, 2014
We'll send you an email as soon as it is available!