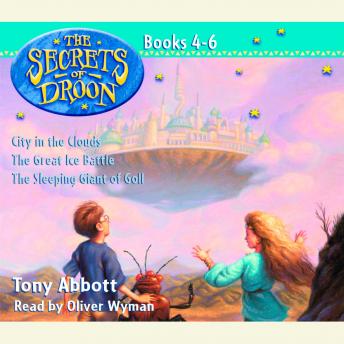 The Secrets of Droon: Volume 2: #4:City in the Clouds; #5:The Great Ice Battle; #6:The Sleeping Giant of Goll

City in the Clouds
Uh-oh! Neal has a problem. He’s turned into a bug–again. Eric and Julie hope someone in Droon can help. Princess Keeah thinks there might be a cure in the City in the Clouds. Too bad the friends only have one day before the city disappears!

The Great Ice Battle
Brrr! Jaffa City is under a spell of ice and snow. Even Galen the wizard is frozen solid! Eric, Julie, Neal, and Princess Keeah have to figure out a way to break Lord Sparr's curse. But they better hurry or they might get frozen, too.

The Sleeping Giant of Goll
Lord Sparr has found a new weapon to use against the city of Droon. He’s woken up a mean old giant that will now obey his every command! It’s a good thing Eric, Julie, and Neal are around to help their friends try to stop Lord Sparr. It’s a giant job, but somebody’s got to do it!

Secrets of Droon: Volume 2: #4:City in the Clouds; #5:The Great Ice Battle; #6:The Sleeping Giant of Goll

This title is due for release on July 12, 2005
We'll send you an email as soon as it is available!