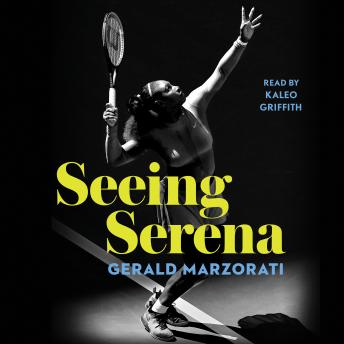 A riveting, revealing portrait of tennis champion and global icon Serena Williams that combines biography, cultural criticism, and sports writing to offer “a deep, satisfying meditation” (The New York Times) on the most consequential athlete of her time.

There has never been an athlete like Serena Williams. She has dominated women’s tennis for two decades, changed the way the game is played, and—by inspiring Naomi Osaka, Coco Gauff, and others—changed, too, the racial makeup of the pro game. But Williams’s influence has not been confined to the tennis court. As a powerful Black woman who struggled to achieve and sustain success, she has emerged as a cultural icon, figuring in conversations about body image, working mothers, and more.

Seeing Serena chronicles Williams’s return to tennis after giving birth to her daughter—from her controversial 2018 US Open final against Naomi Osaka through a 2020 season that unfolded against a backdrop of a pandemic and protests over the killing of Black men and women by the police. Gerald Marzorati, who writes about tennis for The New Yorker, travels to Wimbledon and to Compton, California, where Serena and her sister Venus learned to play. He talks with former women’s tennis greats, sports and cultural commentators—and Serena herself. He observes Williams from courtside, on the red carpet, in fashion magazines, on social media. He sees her and writes about her prismatically—reflecting on her many, many facets.

The result is an “enlightening…keen analysis” (The Washington Post) and energetic narrative that illuminates Serena’s singular status as the greatest women’s tennis player of all time and a Black woman with a global presence like no other.