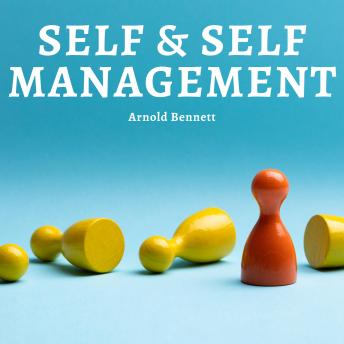 Self and Self-Management: Essays about Existing is one of Bennett's most successful works, comprising a series of essays that address the struggles concerning work that mainly young women have faced during his time, at an individual level.

The essays start at a basis that seems to suggest all individuals have a certain ability to use their energy wisely while working, and to either tap into their own resources, or use tactics of avoidance that can be extremely elaborate at a psychological level. According to Bennett, 'some individuals appear to lack energy, when, in fact, they are full of energy which is merely dormant.'

The essays themselves tackle issues that we are faced with on a daily basis even today. The lack of useful energy, inspiration and motivation that even the most brilliant people in the world seem to cope with at times often leads to debilitating consequences, many of which can be avoided - according to Bennett - with a proper understanding of the process.

The author takes us through a deep psychological and philosophical journey into the human psyche, that seems to lead to practical applications and results, however, only for those willing to put the ideas of books such as this one to the task.