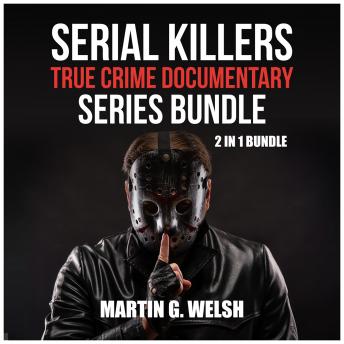 Serial Killers True Crime Documentary Series Bundle: 2 in 1 Bundle, Golden State Killer Book, Serial Killers Encyclopedia
The Golden State Killer was one of the most prolific predators in U.S. history. He terrorized the suburbs of Sacramento, and, later in his spree, near Los Angeles, hundreds of miles to the south.
This bundle provides a brief overview of the crimes committed by the so-called 'Golden State Killer' who terrorized California for more than a decade.
Investigators initially believed that the case had gone cold for good and the killer would never be identified. But the dogged efforts of those who wanted to see justice done, aided by a technological breakthrough, finally led to an arrest, and closure for the survivors of the crimes and the families of the victims.
This two-in-one bundle series includes the following audiobooks:
1. Golden State Killer Book: What Lies Beneath The True Story of the East Area Rapist Psychopath A.K.A. The Night Stalker That Kills In The Dark (Serial Killers True Crime Documentary Series)
2. Serial Killers Encyclopedia: The Book Of The World's Worst Murderers In History
Get your copy of Serial Killers True Crime Documentary Series Bundle: 2 in 1 Bundle today!