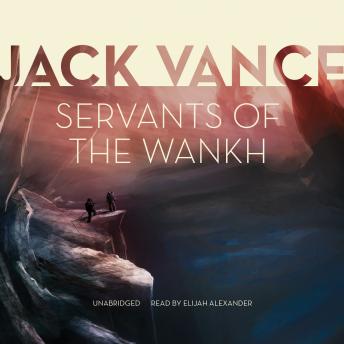 #2 of The Tschai, Planet of Adventure Series

Marooned on the strange planet Tschai, Adam Reith agreed to lead an expedition to return the princess Ylin Ylan, the Flower of Cath, to her homeland halfway around the globe.

Monsters of land and sea lay before them, as well as beings both human and alien who might rob, kill, or enslave them. Tschai was a large planet, an ancient planet, where four powerful alien races struggled for mastery while humans were treated as pawns; nothing would be easy for Reith on this journey. But the girl’s father was enormously wealthy and her homeland technologically sophisticated.

If Reith was ever to obtain human aid in returning to Earth, where better than Cath? If only he could get there …

Servants of the Wankh, complete in itself, is the second volume of Jack Vance’s masterwork interplanetary saga.