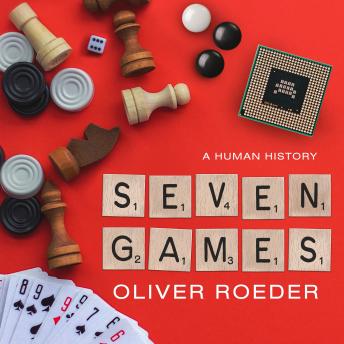 Checkers, backgammon, chess, and Go. Poker, Scrabble, and bridge. These seven games, ancient and modern, fascinate millions of people worldwide. In Seven Games, Oliver Roeder charts their origins and historical importance, the arcana of their rules, and the ways their design makes them pleasurable.

Roeder introduces thrilling competitors, such as evangelical minister Marion Tinsley, who across forty years lost only three games of checkers; Shusai, the Master, the last Go champion of imperial Japan; and an IBM engineer who created a backgammon program so capable at self-learning that NASA used it on the space shuttle. He delves into the history and lore of each game: backgammon boards in ancient Egypt, the Indian origins of chess, how certain shells from a particular beach in Japan make the finest white Go stones.

Roeder explores why games, seemingly trivial pastimes, speak so deeply to the human soul. He introduces an early philosopher of games, the aptly named Bernard Suits, and visits an Oxford cosmologist who has perfected a computer that can effectively play bridge, a game as complicated as human language itself. Throughout, Roeder tells the compelling story of how humans, pursuing scientific glory and competitive advantage, have invented AI programs better than any human player, and what that means for the games-and for us.

I really interesting and up to date overview of classic games, nicely narrated. Can be taken as a podcast, listening to whichever section you are intrigued by. Guaranteed that by the end you'll have installed at least one of them on your phone!

Awesome book! I wish Mah Jong was included in this book.

This title is due for release on January 25, 2022
We'll send you an email as soon as it is available!