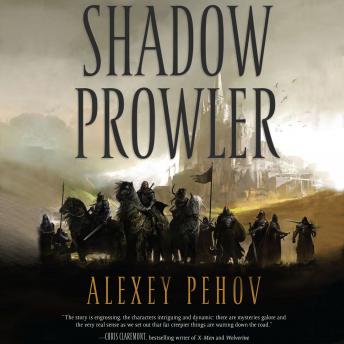 And he has assembled a fearsome horde; thousands of giants, ogres, and other creatures are joining forces from all across the Desolate Lands, united, for the first time in history, under one, black banner. By the spring, or perhaps sooner, the Nameless One and his forces will be at the walls of the great city of Avendoom.

Unless Shadow Harold, master thief, can find some way to stop them.

Epic fantasy at its best, Shadow Prowler is the first novel in a trilogy that follows Shadow Harold, a legendary thief in a land of grand thieves, in pursuit of a magic Horn that will restore peace to the Kingdom of Siala. Harold will be accompanied on his quest by an Elfin princess, Miralissa, her elfin escort, and ten Wild Hearts, the most experienced and dangerous fighters in their world…and by the king’s court jester (who may be more than he seems…or less). Not all of them will survive. Perhaps none of them will. Whole brigades of warriors and teams of wizards have failed before them. This band of outcasts, however, has something that can never be equaled: their extraordinary bravery, their fearsome skills, and the love they bear for their homeland and their comrades.

Reminiscent of Michael Moorcock’s Elric series, drawn from the great heart of Russian folklore, Shadow Prowler is the first work to be published in English by the bestselling new-generation fantasy author Alexey Pehov. The book was translated from Russian by Andrew Bromfield, best known for his work on the highly successful Night Watch series.

This title is due for release on February 16, 2010
We'll send you an email as soon as it is available!